On September 16th, President Trump nominated Nathan Simington to fill a vacancy on the Federal Communications Commission after withdrawing Michael O’Rielly’s nomination to serve another term on the Commission.

Simington is currently an adviser for the National Telecommunications and Information Administration (NTIA), which specializes in telecommunications policy. The NTIA, which operates under the purview of the U.S. Department of Commerce, recently petitioned the FCC to rethink liability protections for the way social media platforms moderate third-party content. Notably, President Trump withdrew O’Rielly’s nomination on August 3rd after the commissioner made comments expressing doubts over proposals that the FCC target social media companies for the way they regulate content.

In addition to his work at NTIA, Simington previously worked as an associate for Mayer Brown LLP, Kirkland & Ellis LLP, and Chapman and Cutler LLP.

Simington’s confirmation process is not likely to be a quick one. The Senate, which handles the confirmation process, is doubtlessly cognizant of the impending election and is likely to prioritize the vacancy left on the Supreme Court following the passing of Justice Ruth Bader Ginsburg. Democrats are also likely to be critical of Simington’s efforts to change the way social media companies curate content, as well as the timing of the nomination following the withdrawal of O’Rielly’s nomination.

If Simington is not confirmed by January, a potential second-term President Trump would need to renominate him. If former Vice President Joe Biden is instead elected, he would have the option of letting the nomination expire and renominating O’Rielly or selecting a different candidate. 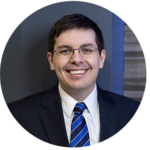